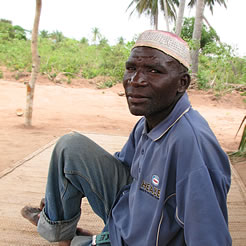 Sherife, a Mwinika believer who worked to translate the Bible to his native language.

We recently received this update from New Tribes Mission regarding one of our supported missionaries working as a Bible translator in Zimbabwe.

Sherife was more than just a Mwinika tribesman to Bible translator & RBC-supported missionary, P.  He was a fellow believer, one of the first Mwinika Bible teachers, and a Bible translation helper. He was also a friend. And now P. sat by Sherife as he lay on his deathbed. P. remembered another time when Sherife lay critically ill in bed – before he was saved, before Bible teaching even began in the Mwinika village. But this time it was different. Sherife was a believer in Jesus. Still, it was hard to watch as tears filled Sherife’s eyes, spilling down his cheeks.

“Let me translate my tears,” Sherife said to P. “I am crying because of my unsaved family members… I know where I am going, but I am worried about them. I didn’t know God until you came and told me about Him. Now I know Him. Now I am going to be with Him. Thank you for coming. Thank you beyond thanking. Thank you.” About a week later, Sherife was ushered into the presence of his Savior.

Of greater importance to Sherife than “translating his tears” was translating God’s Word into the Mwinika language. He was one of several Bible translation helpers that worked tirelessly alongside P. to see this translation come to fruition. But as of his death, the project was not yet done.

Please pray for our missionary P. and the other Mwinika men as they continue translating, looking to the day when the Mwinika Bible translation is complete.

1 thought on “From the Field: “Let Me Translate My Tears””