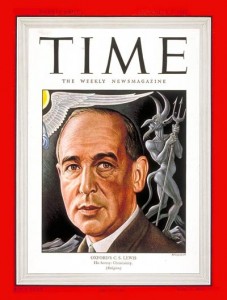 My wife Heidi and I had the pleasure of attending The C. S. Lewis Institute conference a few weeks ago. Lewis’ book Mere Christianity was the topic. It had been a few years since I’d read the book, and it seemed like a good way to get a refresher course on one of the 20th century’s great Christian thinkers.

Dr. Chris Mitchell, a professor at Wheaton College, led us through five fascinating lectures. I had not realized that Mere Christianity was originally a series of radio addresses that were given over the BBC during World War II. I also hadn’t previously known what it cost Lewis to clearly proclaim his faith to over a million listeners.

We often think that the world’s hostility toward faith in Christ is worse now than in our parents’ day. Not so. In 1947, Lewis’ picture appeared on the front cover of Time magazine. The headline read:

Lewis was disdained by many at Oxford because he spoke publicly of his faith in Christ. Their attitude seemed to be it’s fine to be a Christian, but not to speak of it in public – and certainly not in academia.

Dr. Mitchell also read a startling quote from authoress Virginia Woolf. After a meeting with T. S. Elliot during which he told her he was now a follower of Christ, she wrote:

“I have had a most shameful and distressing interview with dear Tom Elliot, who may be called dead to us all from this day forward. He has become an Anglo-Catholic believer in God and immortality and goes to church. I was shocked. A corpse would seem to me more credible than he is. I mean, there’s something obscene in a living person sitting by the fire and believing in God.”

That quote is from the year 1928. I was reminded of Jesus words in John 15:18 – 20, “If the world hates you, keep in mind that it hated me first. If you belonged to the world, it would love you as its own. As it is, you do not belong to the world, but I have chosen you out of the world. That is why the world hates you. Remember the words I spoke to you: ‘No servant is greater than his master.’”