We will regather for in-person worship this Sunday, July 12.Get Info & Register Here

Cambodia is one of the world’s poorest countries and heavily dependent on foreign aid. Years of war and genocide followed by a corrupt government has hindered the development of this country and kept most of the population poor. Thirty-eight percent of the population lives below the poverty line.

After the Vietnam War, the Marxist Khmer Rouge was in command (1975), and Cambodia endured one of the most savage slaughters in the 20th century. Almost all former military personnel, civil servants, doctors, educated people and wealthy people and their families were killed, and the nation was turned into a vast labor camp. The Vietnamese army ousted the Khmer Rouge in 1979. 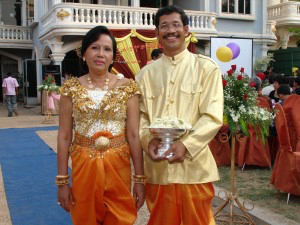 Buddhism is the national religion. The Khmer Rouge sought to eradicate all religions and 90% of Buddhist monks and most all Christians perished. Since 1979 there have been periods of tolerance and since 1990 Christians have been allowed to worship openly but some limitations on mission activity has been legislated.

The great sufferings of the people in the past cause them to now be open and responsive to the gospel. From only a few thousand Christians surviving into the 90’s, believers now make up 3.5% of the population. This growth is almost entirely through church planting and multiplication done by indigenous church planters and evangelists.

Barnabas is one of these church planters and evangelists. As a native of Cambodia, Barnabas is one of only 200 Christians to survive the Killing Fields of Pol Pot. He joined Ambassadors for Christ International (AFCI) in 2001 to develop the ministry in Cambodia.

Barnabas joined the Communist party as a teenager and was converted to Christ while spying on a Christian evangelistic meeting in the early 1970’s. He was later arrested and sent to the Killing Fields where he spent four years in captivity. After his release, Barnabas was forced to flee the country where he spent another eight years in a refugee camp in Thailand. After returning to Cambodia, Barnabas helped rebuild the church in his native land, and 500 churches have been planted since 1998. Barnabas’ faithfulness to the gospel is an amazing story of that Moody Publishers has published in the book Church Behind the Wire.

Barnabas will be at RBC on Sunday, March 26, 2017 to share his story and encourage us in the area of missions. His book will be available for donation by cash or check only in the lobby after each service. All proceeds of the book sales will directly to Barnabas’s ministry in Cambodia.