Throughout the month of December, RBC ministries, Shepherd Groups, and friends joined together to spread Christmas cheer and the gospel of Christ to our Northern Virginia neighbors. 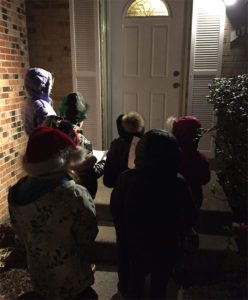 This was the first time that we offered “Caroling for Christ.” It was an evangelistic opportunity, led by those in the congregation. To participate, the carolers would pick up a Caroling Kit that equipped them with everything they needed for planning their community outreach. Each Caroling Kit contained song sheets, candy canes, gospel booklets of the book of John, and invitations to the Christmas Eve service.

After gathering in groups, choosing a time and a location to carol, and assembling the Christmas caroling material, each group greeted 15 houses. Not only was this an event to minister to our community, but it was a fun way to bring Christian brothers and sisters together and be an encouragement to one another. Many caroling groups drank hot cocoa, ate cookies, and shared laughs together.

Over 500 households were reached the Christmas message. Praise God!

Here are a few comments we received from members our caroling groups: 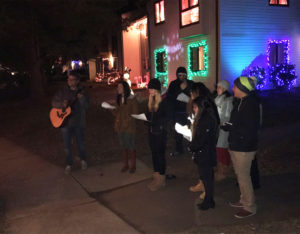 “After caroling at one house, the lady commented that she had never been caroled to before. We asked if she’d like to hear another song and she said, ‘Yes, please!'”

“I was surprised by all the smiles.”

“It was a magical night, hopefully the first year of a long-lasting tradition.”

“We had an overwhelmingly positive response from the neighborhood and one family even wanted more information about RBC service times.”

“We had a whole night of caroling practice and prayer before actually caroling. I’m thankful for this community!”

In Support of Dr. John Brewer