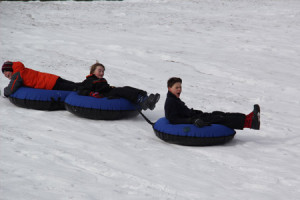 Each winter, the students and leaders of the RBC Youth Ministry are blessed to have the opportunity to “retreat” from the daily schedule of life and trade it for time with each other, time in God’s Word, time on the slopes, time away from electronics, and more.

In February, we went back for the third time to Doubling Gap Christian Retreat Center in Doubling Gap, PA. The setting is awesome for “retreating” because it is an old hotel in the mountains with very little cell service (and it’s covered in snow!)

The speaker this winter was Shelby Abbott, who is on staff and an emcee for CRU (Campus Crusade for Christ). Shelby spoke on the theme of Living Outside the Box. 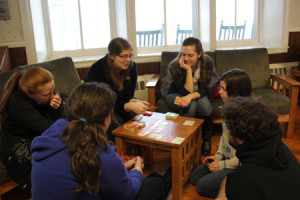 That theme is out of John 17:14-18, where Jesus calls His disciples to be in the world, but not of it. The desire was to help students see that God wants them to be engaged with the world around them without being overtaken by it. To do this as Christians we need to take on God’s approach to life. Shelby spoke on taking God’s approach to pop culture, extremes (legalism vs. license), relationships and dating, and suffering. The final message was to be on taking God’s approach to power (living by the Holy Spirit), but due to snow the retreat ended Sunday night. Many students have commented that the message on relationships and suffering were very impactful to them. This is most likely due to the difference in what they heard from the Bible and what the world tells them about relationships and suffering. God’s Word is truth and speaks! 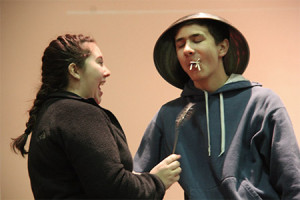 We also had a blast out on the slopes of Round Top, the bowling alley, and the roller rink. New relationships were built and friendships were strengthened. Leaders poured into the lives of the students in their small groups. Students meditated on God’s Word and it spoke to them. We are blessed to have the opportunity to lead these camps and retreats, which are milestones for students because they clearly see and hear God in their lives.

The RBC congregation was generous in providing the funds to give scholarships for over 25 students to be able to attend the retreat. THANK YOU! Your financial gifts and prayers are so important! From the Youth Ministry Staff we all say thank you!

Family Quest: The Hope – He Has Risen, 1

Family Quest: The Hope – He Has Risen, 2