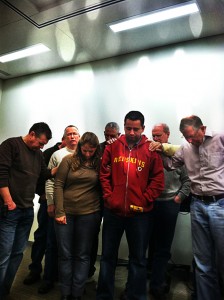 This picture was taken in January 2012 – a little over a year ago – when our staff and pastors were blessed to spend some time praying for Marcelo and Holly. We are thankful to God for where he is leading them now.

Marcelo and Holly minister with Open Arms Worldwide in Assis, Brazil. In 2012 they felt the call to change their ministry and move north to Belem, Brazil to work alongside RBC-supported missionaries Lynne McLeavy and Bete Cordosa in the Creative Hands ministry.  This ministry focuses on the men, women and children that live the Flowers Estate, which is actually an area near the dump. In late January, Marcelo and Holly traveled 5 days north with all their belongings and arrived at Bairro dos Flores, or the Flowers Estate  They were able to look at a house to live in the day they arrived and thankfully they were able to purchase the house and move in 2 weeks later.  Owning their own home will communicate to the people that they are there for the long term.  This will be huge in developing relationships with the people of Flower Estates. It will also offer a safe place to store ministry supplies and it is large enough that they will be able to host short-term missions teams that come to help minister throughout the year thus reducing the team cost.

Marcelo will be caring for the church that will officially started the first Sunday of March. This is the first time this area will have a church.  The people from the dump are shunned from other local churches as outcasts. As they prayerfully consider the needs of those who frequent the services, Marcelo and Holly will look to develop additional facets of ministry that will best meet the needs of the church attendees.

Marcelo will also be starting a soccer school which will operate throughout the week for boys, teens, and men. They are prayerful that the school will be a vehicle to specifically minister to the boys and men of the community, sharing the gospel and developing discipling relationships. Marcelo and Holly will assist in the Saturday Bible Clubs, where children and teens gather weekly to participate in group activities and hear from the Word. Holly will be helping in the half day preschool that functions from Tuesday to Friday.

Holly is also excited to be the liaison between their ministry and Word of Life—a local Christian school—where 15 children from Bairro dos Flores are attending, having been sponsored by faithful brothers and sisters from the States. Holly will also be working with a teen servant group called BOPE. Their  prayer is through every activity, they point others to Christ.

The longer they are there and the more they get to know people, the more thrilled they are about the opportunity of being there. They hope and pray that wherever the Lord leads them in life, they never lose the excitement of hopeful anticipation that they have knowing they serve a God who has the power to transform lives.

Though your sacrificial giving to RBC, the Missions Committee was able to significantly help in the moving expenses and with the cost of purchasing their home.  The Missions Committee was also able to increase the monthly support of Marcelo and Holly. We pray that God will greatly bless their vital ministry as the gospel of Jesus is lived out in Bairro dos Flores. Please pray with us for them.