Ralph Herring, who had a very long connection with Reston Bible Church, went to be with the Lord on April 12 at Winchester Medical Center.

Ralph’s connection to our church began in June of 1978 when John Woodall (an RBC pastor at the time) and his father were stopping by homes in the Reston area and talking to them about the gospel. They stopped by the home of Ralph and Ruth Herring, and over  the course of a couple of meetings, they shared the gospel and saw them both come to Christ along with their son Steve.

Soon afterwards, Ruth was diagnosed with cancer and Ralph retired from his electrical contracting business to care for her. Ralph and Ruth came to love RBC and both decided that Ralph would also begin helping RBC build our first church home on North Shore Drive in Reston. This was a very selfless decision for them both, knowing it would take a great deal of Ralph’s time and effort. 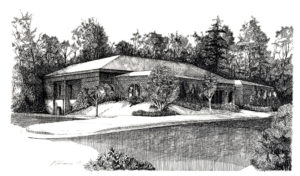 This sketch is of our North Shore campus in Reston. The Lord used Ralph and his family in an instrumental way to provide this facility for our church.

Ralph was instrumental in designing, funding, and in finding ways to cut costs that allowed the building to be completed. The building process started in the fall of 1982, Ruth went to be with the Lord in October of 1983, and the church building was finished in June of 1984. The fellowship hall was dedicated in recognition of the faith and sacrifice from both Ruth and Ralph and was named “Herring Hall.”

Ralph continued to be an active and driving force within Reston Bible for many years after that. He took on the role of adviser to the leadership at RBC and worked as well with the early efforts to relocate RBC, which eventually led to us now being on our current property.Ralph married Beverly Shull and they relocated to Winchester in the mid 1990s. Ralph and Bev have attended Fellowship Bible Church in Winchester since then. His son Steve and his wife Jacki attend RBC as do his stepson, Bob Shull and his wife Leisa. Ralph also has two stepdaughters, 17 grand children, and 4 great grand children.

A viewing for Ralph Herring will be on Monday, April 15, from 6:00 to 8:00 pm at Omps South Chapel, 1260 Front Royal Pike in Winchester. The Celebration service for Ralph Herring will be on Tuesday April 16 at 11:00 am at the same location. The burial and reception will follow. Details can be found and regards given at Ompsfuneralhome.com. Any memorial contributions may be made in Ralph Herring’s name to the Fellowship Bible Mission Fund, 3217 Middle Road, Winchester, VA 22602.